Rum cocktails: a concentrate of creativity by Laurence Marot

By Compagnie des IndesSeptember 7, 2020No Comments

Rum whether Spanish, British or Agricole style, it’s a spirit which oozes exotism. These past few years, this spirit was adopted by all the best cocktail bars from Paris to Singapore. No longer limited to simple mojitos and rum and cokes, the diversity of its flavours makes it a constant source of inspiration for mixologists.

Whether white or dark, cane juice or molasses, matured a few months in steel vats or years long in oak barrels, any bartender will tell you, rum is a versatile spirit. It’s easy to mix with a large choice of cocktails, long or short drinks, sweet, sour or bitter for the connoisseurs. Ever since rum’s global market boom, cocktails bars dedicated to rum lovers have multiplied: from uber exotic tiki bars to rum experts bars, one has literally no excuse not to know about rum.

One praise worthy cocktail bar is the Mabel in Paris. Joseph Akhavan’s meticulous and sophisticated work hoisted the bar up to the 98th of The World’s 50 Best Bars’ list. Another would be London’s Black Parrot with its extraordinary collection of bottles and tailor-made approach to cocktails. Berlin’s Rum Trader and their perfect execution making any classics. As far as tiki bars go, London’s Laki Kane or Chicago’s Lost Lake will be sure to have you travel the world with a simple sip of any of their amazing cocktails.

History, rum present every step of the way

No doubt, rum is one of the rare spirits anchored in key moments of humankind’s history. During the XVIIth century for instance, a time when the British empire stretched all the way to India, they imported the recipe of our cocktails’ ancestor – punch – from this foreign land. The drink was then made of brandy, lime juice, sugar, water and various spices that protected sailors from infectious diseases (first written record in 1632). With England colonising some islands in the Caribbean, which main activity was harvesting sugar cane, rum soon became the spirit of choice for this specific drink. Famous bartender Jerry Thomas published in 1862 his first official cocktail recipe book «The Bar-Tender’s Guide». Punch is here essentially made with Jamaican rum. As for French colonies, the no less famous Ti’Punch was created on the island of Marie-Galante to celebrate the French decree abolishing slavery in 1848. To this day it remains a most popular cocktail in the West Indies.

From the XIXth century, Cuba established its own rum distilled in column stills. Light, it sparked immediate interest. Cantineros – the best Cuban bartenders in the 1910’s – made sweet and refreshing drinks with this rum. During prohibition, some Americans in dire need of alcoholic beverages, escaped to the largest Caribbean island for an evening, there they discovered the irresistible flavours of the Daïquiri (Cuban rum, lime juice, sugar syrup), Floridita’s flagship cocktail, and one of Ernest Hemingway’s favourite places. More elixirs which democratised the cocktail world in the years 2000, such as the Mojito and the Cuba libre, also had their glory days back in the day.

The severe era of prohibition in the US made place for a light and carefree new culture only a few years later: the tiki spirit drew its inspiration from Polynesia with a lifestyle of sun, beach and wahines. From the 40’s, cocktails become the emblem of this heavenly culture thanks to two people, nowadays mixology and rum mentors: Ernest Raymond Beaumont-Gant better known as Donn Beach and founder of Donn The Beachcomber in Hollywood; and Victor Jules Bergeron nicknamed Trader Vic. The first created the Zombie, a cocktail composed of a blend of 10 cl of rum minimum and the second created the mai tai, a very easy to drink cocktail. In 2019, rum confirmed its place in the 2000’s fresh wave of mixology.

Which cocktail, which rum: the bartender’s magic

For a long time, bars used specific styles of rum to make specific cocktails, depending on its origin and its aromatic profile: light and discreet Cuban rums for crowd pleasers such as mojitos and daïquiris, cane juice flavourful Agricole rums for ti’punchs or planteurs, Intense spicy and woody British style rums for tikis. With the buzz of cocktails and rum, bartenders successfully broke down those common place ideas and proved that whether shaked or stirred they can make any cocktail from any style of rum.

Here below are some of bartenders common rules:

White rums: Latin cocktails (mojito, daïquiri, pinacolada …) are made with Cuban rums as well as British style or Agricole rums depending on the flavours and/or power sought after; West Indies drinks (ti’punch and planteur) are still usually made with Agricole or French Caribbean 50° rums to highlight the rich aromas of Sugar Cane; tikis are made with any type of white rum, depending on the bar’s style, modern or classic.

Old rums: Using a 3 or 12 year old rum to make a cocktail is no longer frowned upon. Their sturdy character, woody, spicy or rich makes interesting subtle lingering cocktails more so than if they were to be made with a white rum. Ideal for clean drinks such as the old fashioned.

Overproof rums: these rums, usually 50 to 70% Abv, have won bartenders’ special favour. Packed with flavours and alcohol, they are used to make classic strong tiki cocktails like the zombie (no more than two glasses in one sitting) and other exotic drink which require character and strength.

We asked Mabel’s expert Joseph Akhavan to come up with two complex taste combinations made with Compagnie des Indes rums :
Jamaica Navy Strength: «I don’t want to distort or cover up its power, I love its richness, a Negroni or an Old Fashioned perfectly complements its aromatic profile. A Jamaica Navy Strength 5 YO Negroni is simply divine.»

Rum blends: «You have to work with complementarities, its different. For instance, you have to choose whether you want to mix 2 similar rums or on the contrary 2 different styles of rum in order to broaden the aromas of the cocktail. It could be to make a Daiquiri, a Sour, or even a dry cocktail, it really depends what kind of flavours I’m looking for for my cocktail. Compagnie des Indes Tricorne, Latino or Caraibes are quite versatile blends and work really well in cocktails. A Daiquiri can be made with equal parts of Tricorne and Latino 5 YO, for instance.

In order to avoid sounding ignorant when ordering your next drink, here is a short list of rum based cocktails which offer bartenders a variety of alternatives.

Pina Colada: A creamy and fruity cocktail created in the 50’s in Porto Rico. It is very easy to spot with its tall stem curvy glass and its multi-coloured umbrella cocktail stick (white rum, pineapple juice, coconut cream).

Milk punch: A technical and trendy cocktail amongst bartenders, and packed with taste ! It’s usually made with rum, lemon, sugar syrup and various spices supplemented by a good dose of milk, it’s then filtered multiple times. People enjoy it for it being clear as water and silky smooth. 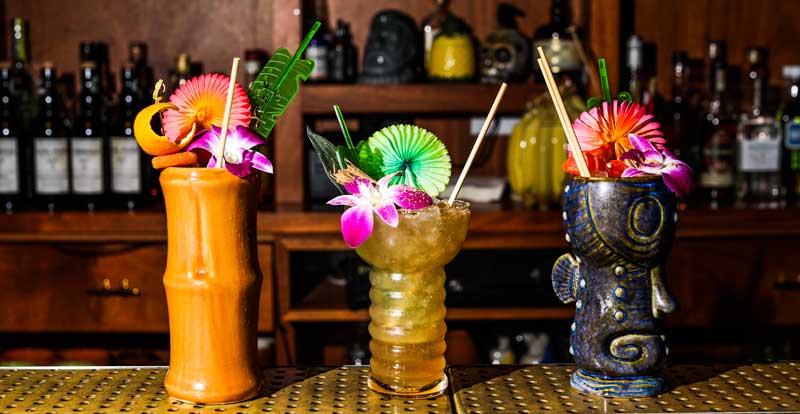